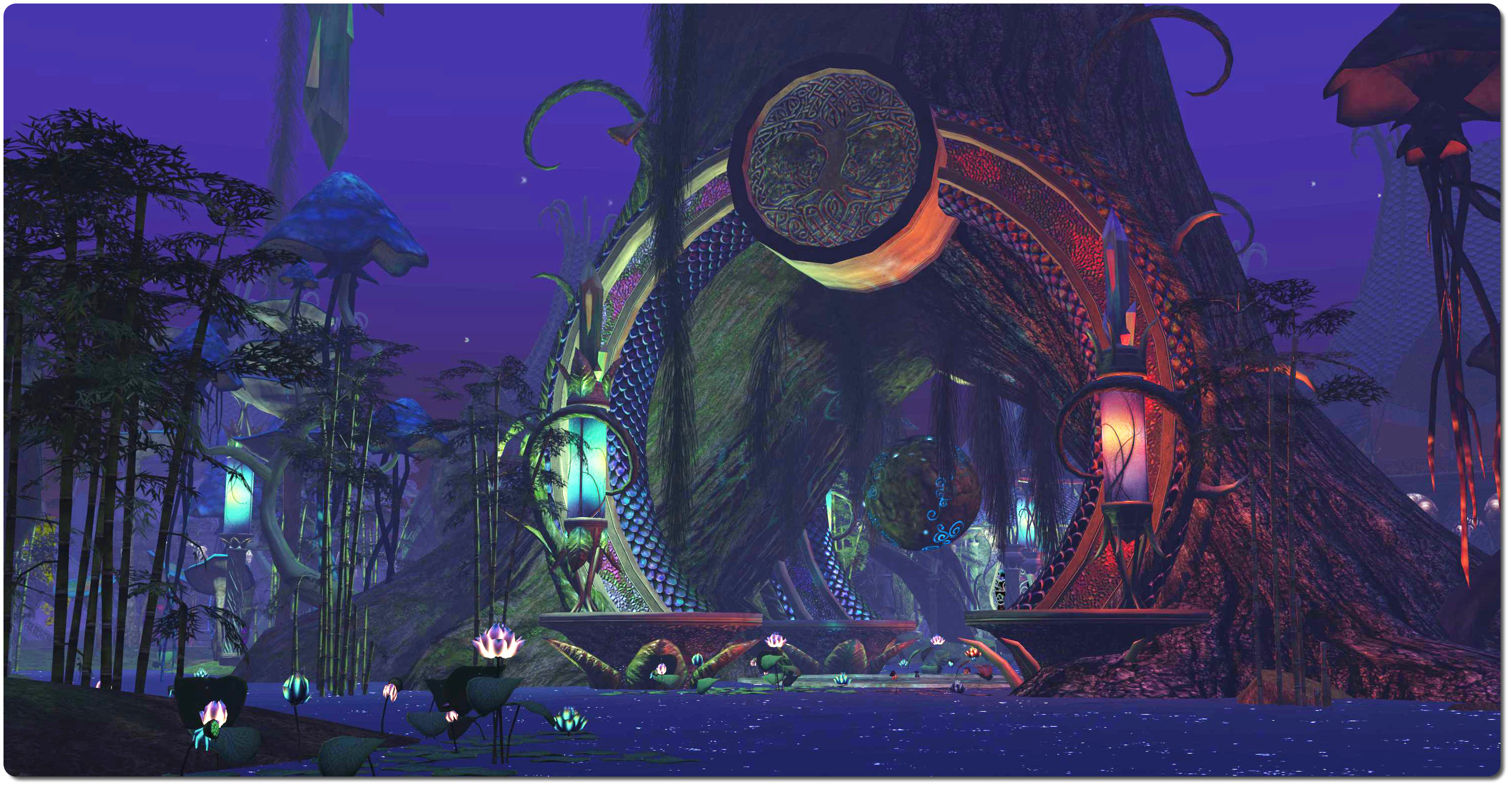 Two of my favourite Fantasy Faire designers are Elicio Ember and Alia Baroque. Their work never ceases to inspire and amaze me, and this year is no exception.

The huge tree sheltered the whimsical buildings, giant lanterns hanging from its ancient branches glowing softly in the dusky light. The structures themselves were all swirls, spirals and beautiful worked metal. It was hard to decide if the swirls and leaves were grown or worked, and the scaled iridescent domes reflected the light of many lanterns adorning the streets. The sound of frogs, cicadas and birds filled the air. “Welcome to the Fae Court,” a melodious voice whispered behind us…

– Extract from The Apprentice’s Journal, by Elicio Ember. 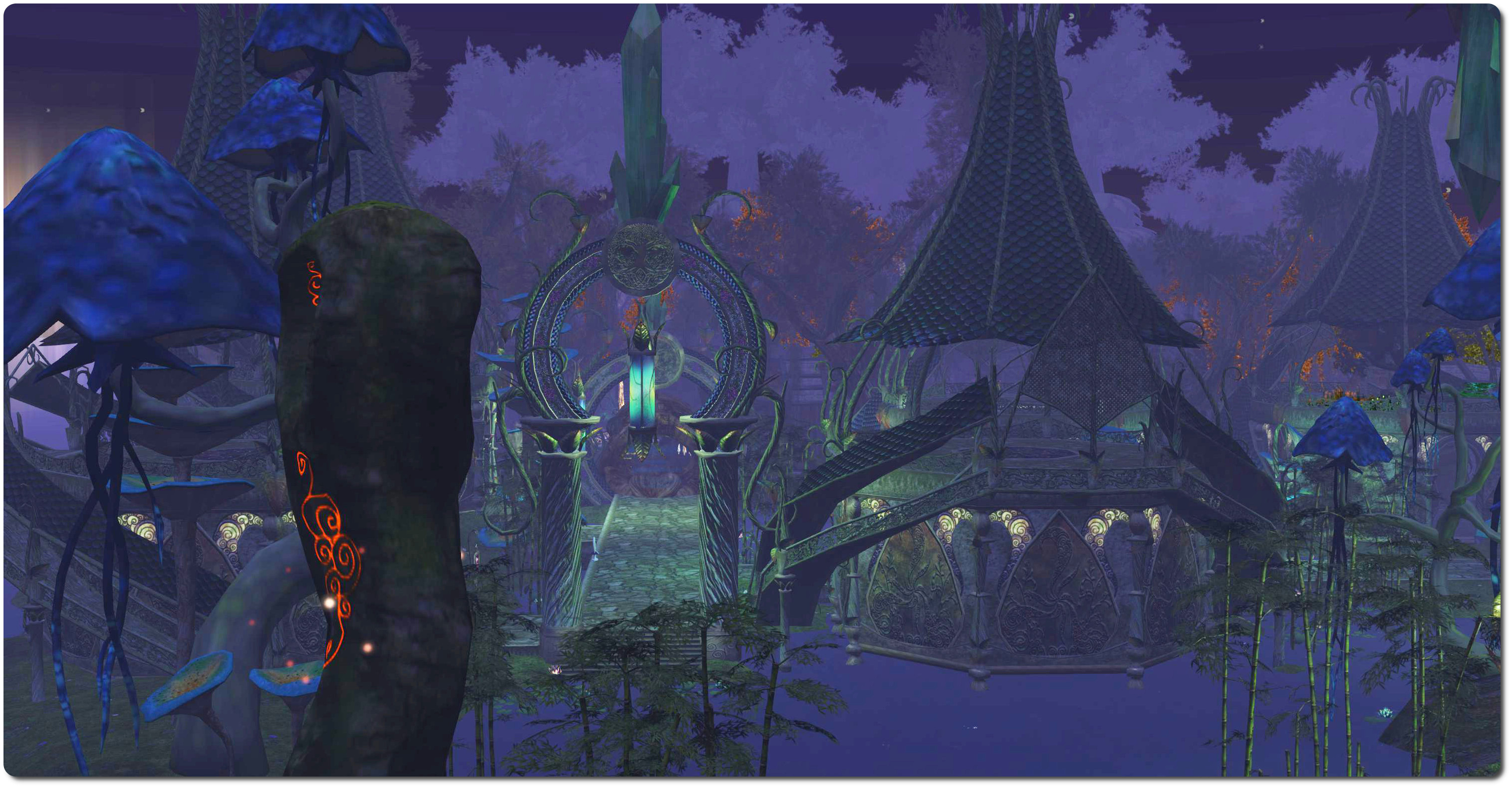 Elicio takes as his theme the Faery Courts, both Seelie and Unseelie, presenting them together under the huge spreading boughs of the great Tree of Light and Dark. Here the high roofs of the pavilions and houses reflect the two courts, green for the Seelie, and darker lavender for the Unseelie, the two merging in the rooftop of the great pavilion of Cerridwen’s Cauldron as it faces the Tree of Light and Dark sitting at the centre of this realm.

This is a region filled with a sense of other-worldliness, a place lifted out of the pages of myth and legend into which life has been breathed. It is also one of the more “open” environments in this year’s Faire, where some many of the regions feature woodland and undergrowth. Here there are broad avenues of stone, flowing water and broad pools upon which lilies float and grow. It’s a place with an air of mysticism and a suggestion of ancient fae rights, where great mushroom grow, and runes glow vein-like in the depths of carved rock. 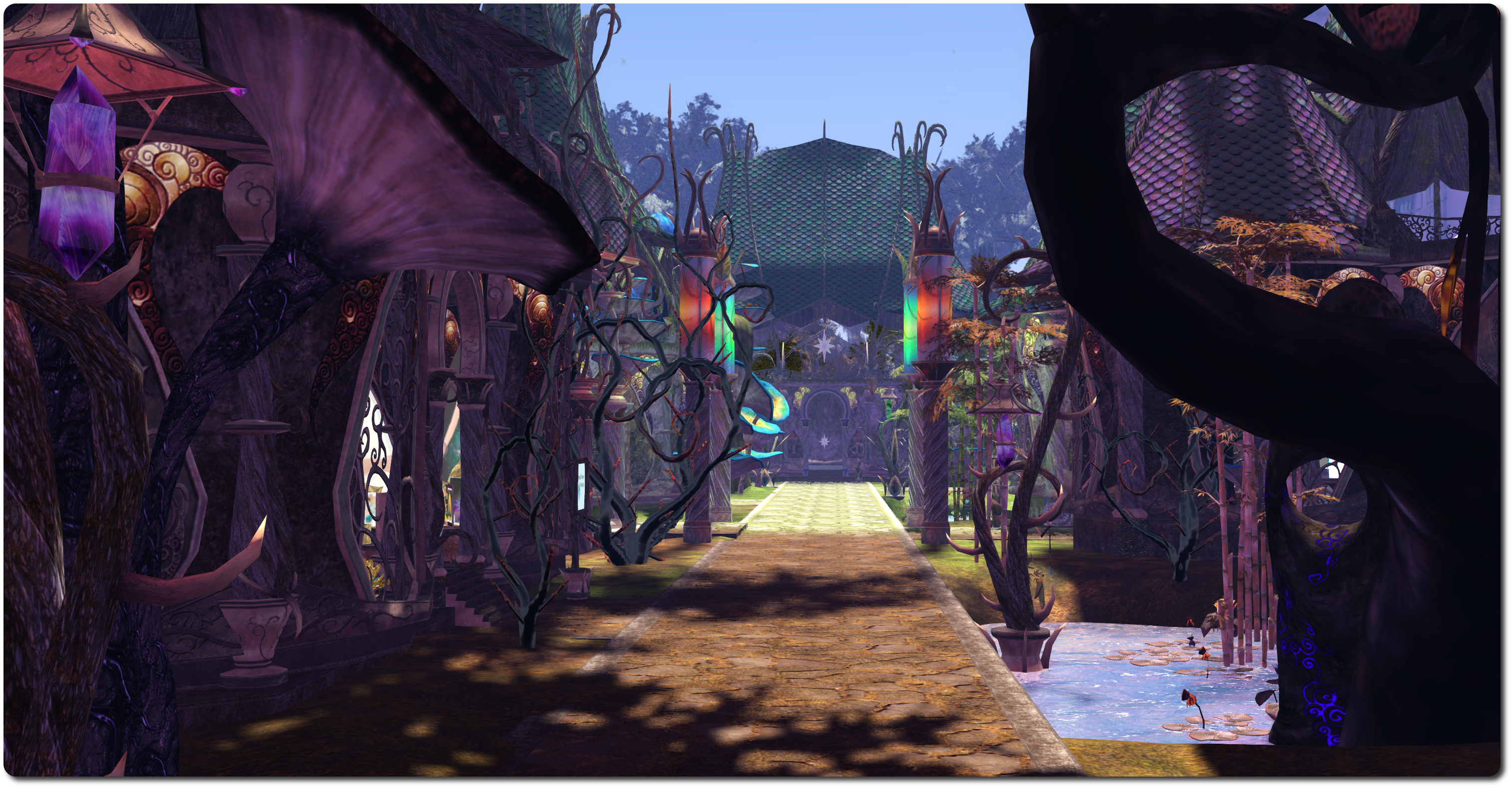 By day the light of the sun warms the stone avenues and sparkles on the warm waters; by night the Court is lit by dozens of softly glowing lanterns hanging from the boughs of the great Tree and along the sides of paths, forming constellations of colour beneath the light of the stars themselves. Laughter and song go hand-in-hand together here, and visitors from far and wide are welcomed. 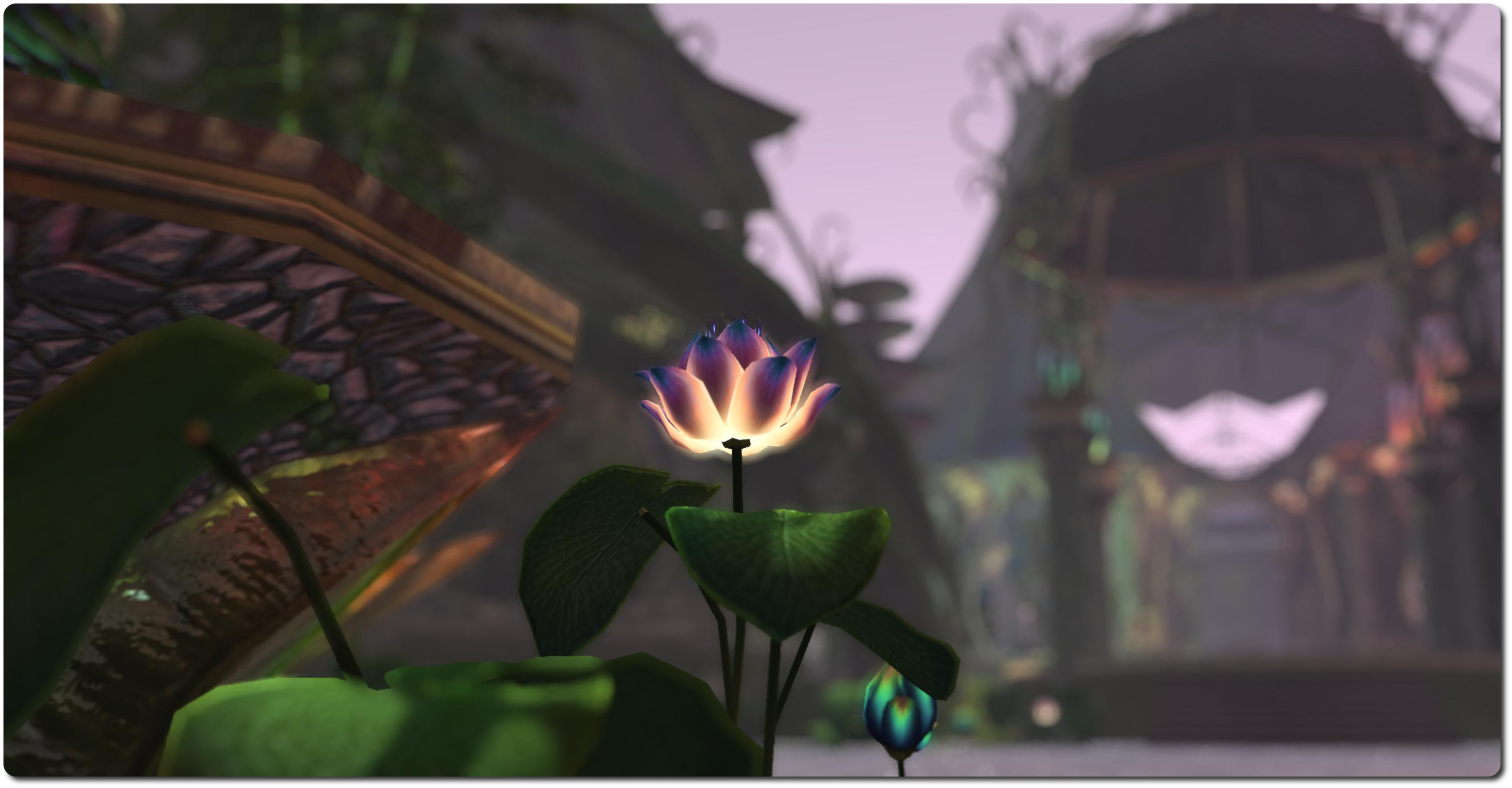 Even the plants here reflect the nature of the two courts, the great mushrooms amidst the tall growths of bamboo bearing the light colours of spring and summer, while those gathered around the houses of the Unseelie carry the darker colours of winter, and the bamboo growth and grass bear the browns of autumn.

Travel to the Faery Court. 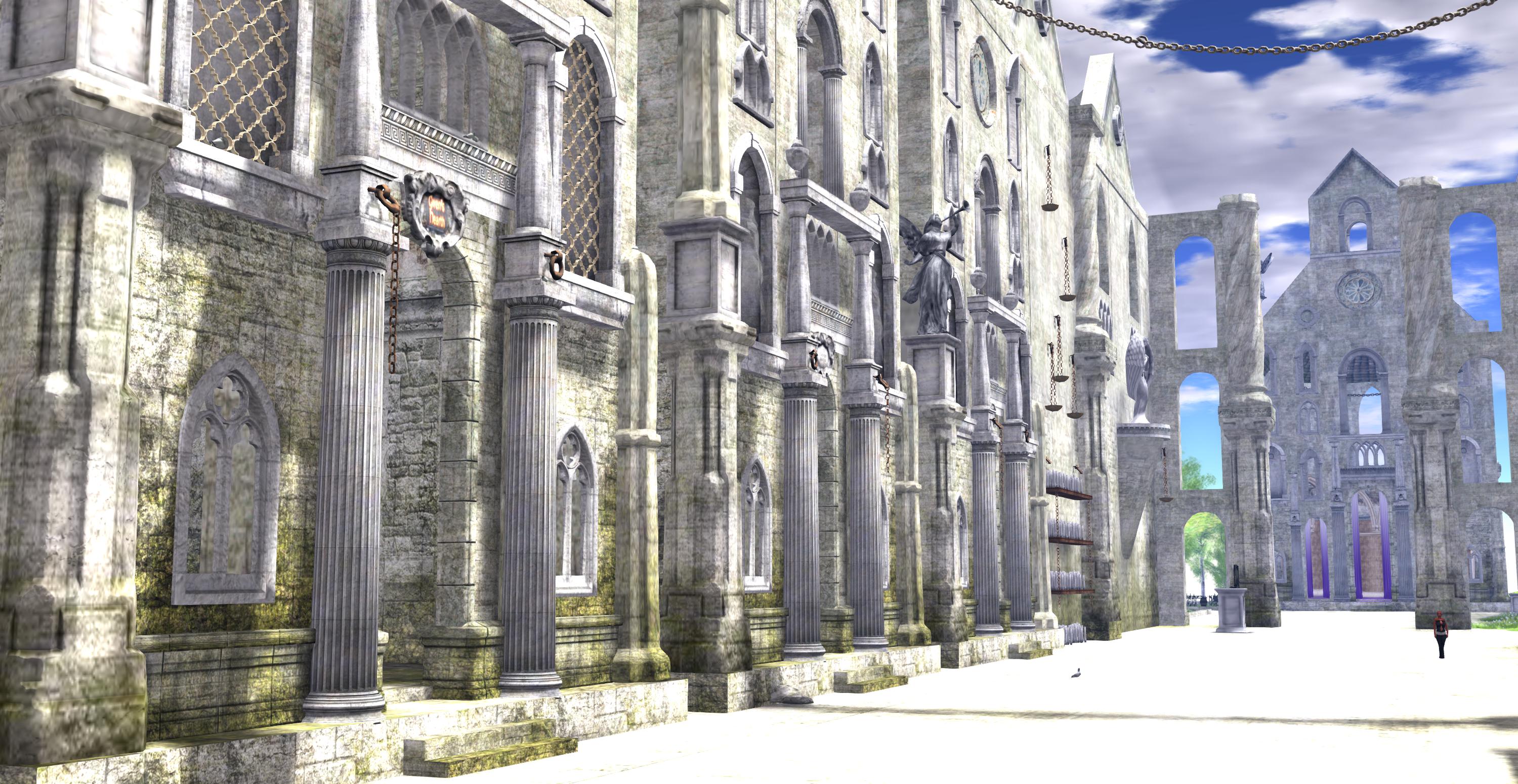 Alia Baroque takes as his theme a great cathedral abbey, floating on green isle above the world, yet anchored to it by great chains; a point lifted towards heaven, yet still beneath it, visible from all the lands around, and where a great stair of glass rises upwards to the gates of paradise.

Most people fly or teleport to Sanctum, but if you tread carefully from either Blackwater Glenn or the Fairelands Junction, you’ll find you can ascend gently to the Sanctum by way of glass stair and floating isles – just keep between the chains! 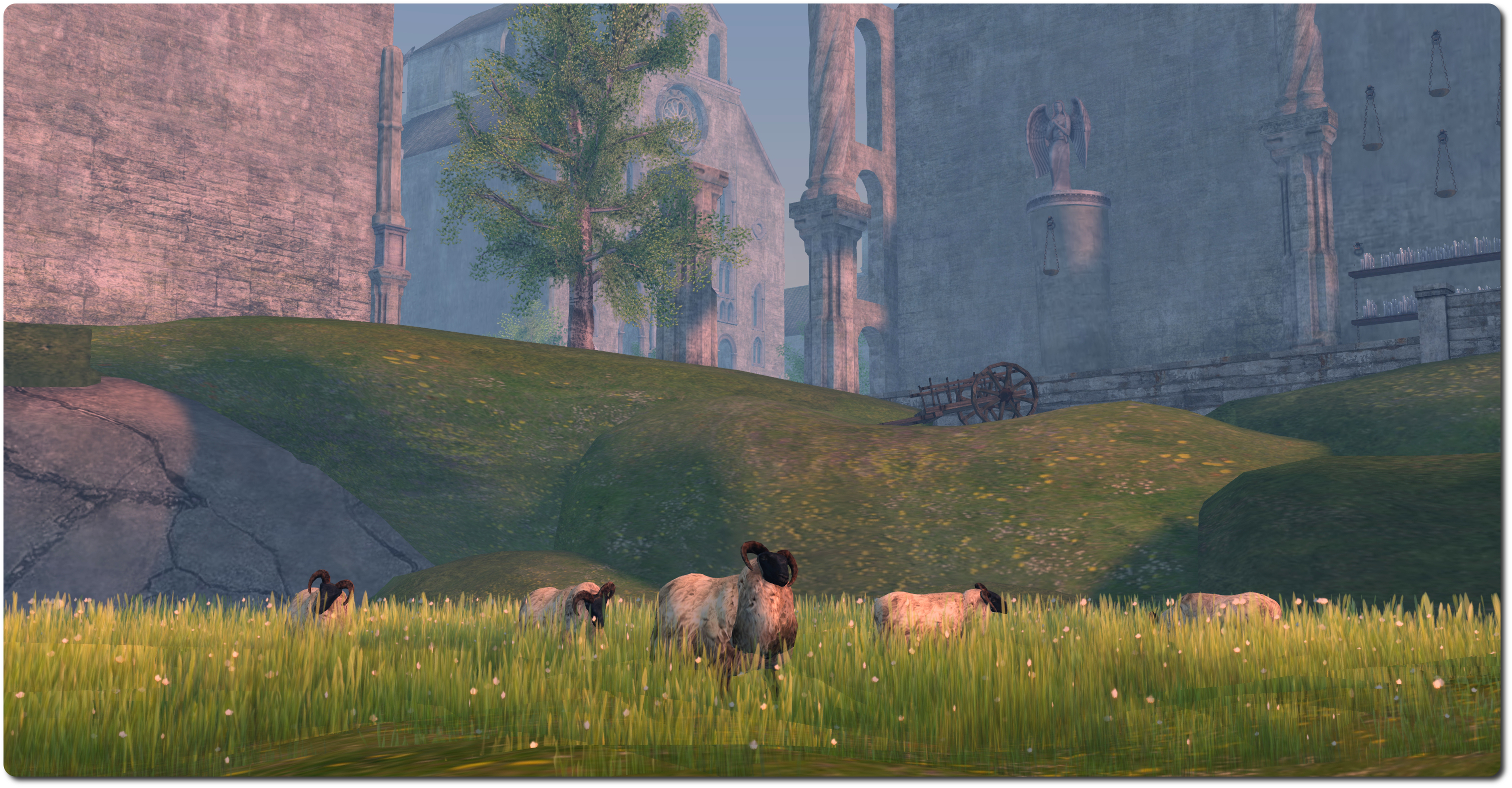 One of the reasons I’m attracted to Sanctum is my love of ancient sites, and there are a number of favourites here in the UK, such as Fountains Abbey in Yorkshire and other great abbeys and cathedrals. While Sanctum is wholly unique and unlike anything I’ve visited in the real world (not least because of it position floating in the sky!), parts of it nevertheless stir memories of visits to place like Fountains, and to churches and cathedrals in Europe.

This is a place of peace and contemplation, where sheep gaze on the grass-topped rocks on which Sanctum is founded, and where stone angels raise their trumpets to the heavens and faint figures stand within high alcoves, shimmering in the half-light as water tumbles from the rock isles to the world below. 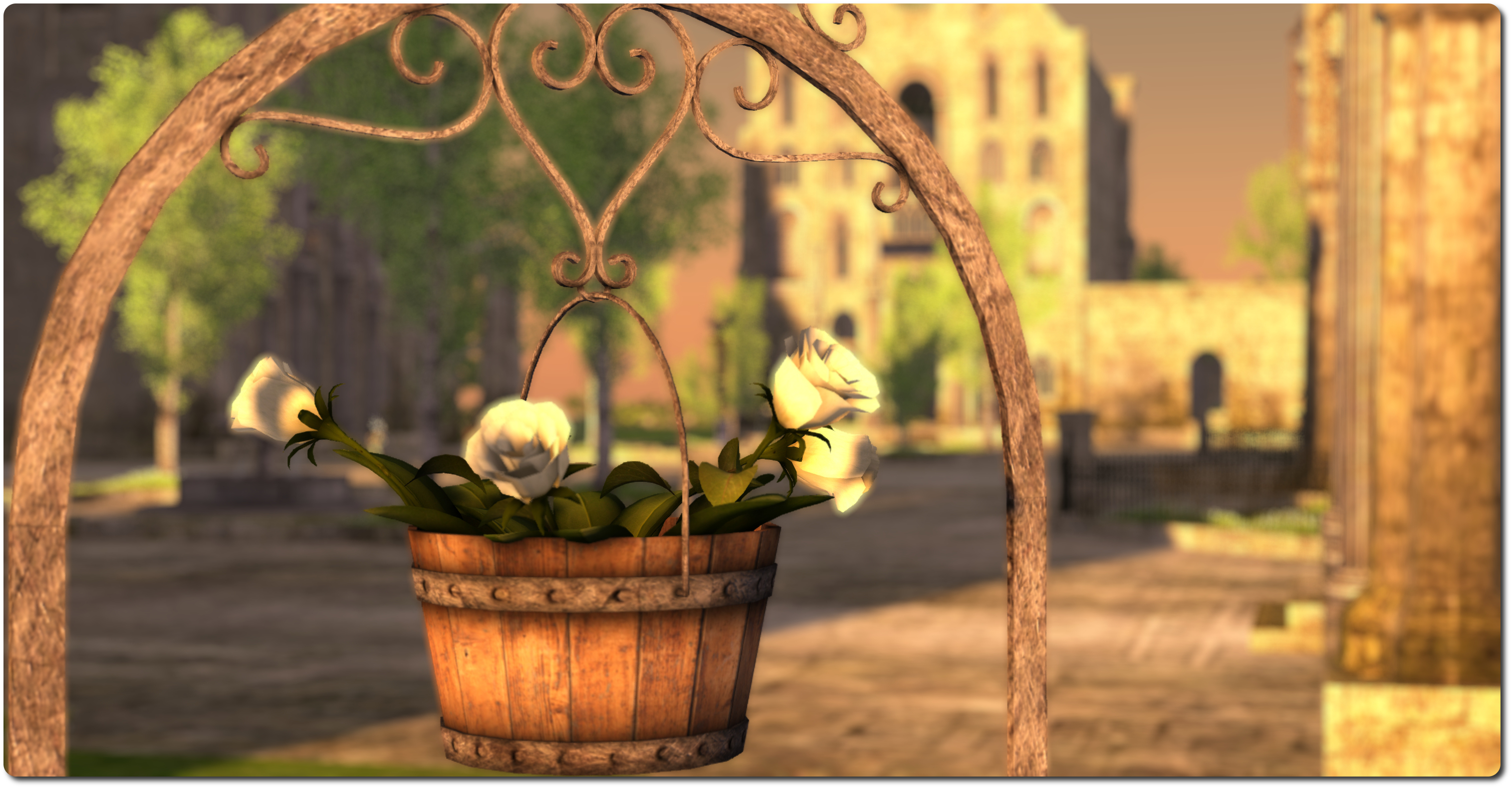 Others eyes also watch over all who visit here; not all of the statues which may be found here might be quite what the seem, as bloggers for the Faire have the chance to become a part of the Sanctum and simply stand and watch those who come and go.

The detail in this build is magnificent, and kept me engaged for a fair amount of time during the blogger’s preview, such was the care and attention evidenced. Even now, when time (which isn’t entirely on my side as I’d hoped this week) allows me in-world and I can get over the Faire, the Sanctum is one of the places to which I’m inevitably drawn. 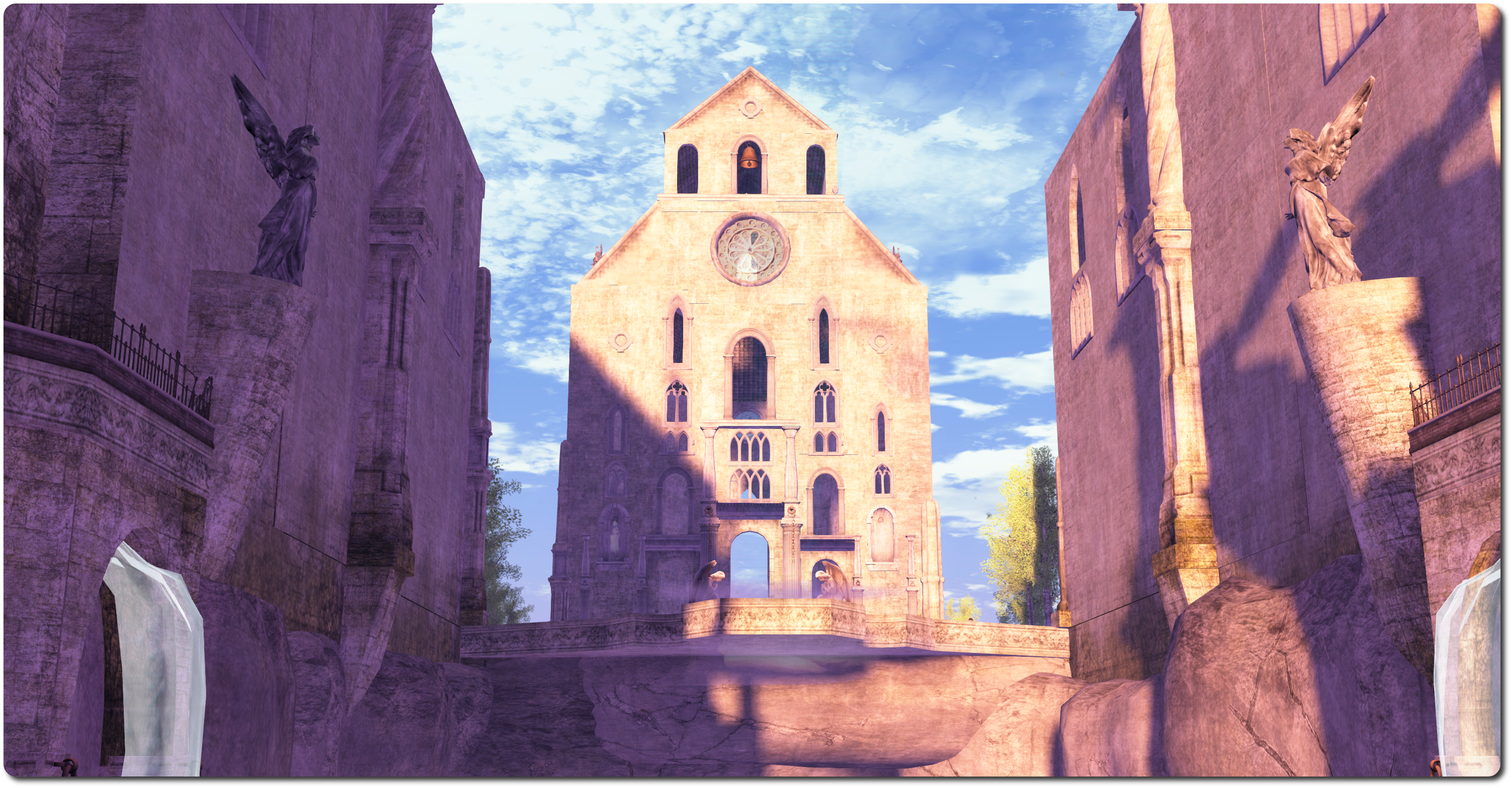 3 thoughts on “Fantasy Faire: dreams of the Faery Court and entering the Sanctum”